Demons in Our Minds

‘…so and so ended his life by consuming poison?’ Scroll through any newspaper, we get to read such real stories every day. We ignore or we discuss briefly about the subject and then move on, rare we try contemplating on the fact that led to the situation that one killed self.

Suhas is a gold medalist in MBA marketing. A fellow from poor background started on a high, got job with 7 figures salary, started his family happily. The confidence was high and destiny showered blessings, sooner he started his business and attained accolades there as well. He was on top when he decided to invest in another venture, he took a great amount of risk investing everything he earned so far but when has the life been so simple every time, this time he stumbled upon few unplanned road blocks and couldn’t handle himself only to lose everything and he was standing right there where he started off. He tried hard but nothing happened and he was left with nothing in his pocket. 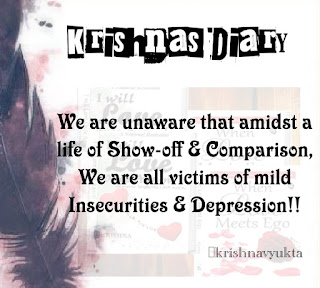 The morning started as usual, he sent his son to school, a warm hug to his wife before he left his home just like any other normal day. The fear of failure, the pressure of peers, the burden of social obligation and set of expectations he had from himself became so heavy on his mind that he preferred to walk towards the railway track to deal with the problem in an unusual way that he never ever did so far. There was dead silence all around as he chose most secluded place where no one can interrupt his plans of making a deal by lying on the railway tracks. It was a perfect plan when laid down, he closed his moist eyes and could hear the railway siren from far. He was left with last moments of his life when he started to evaluate his life so far.

The typical middle class childhood limited to just simple living in few sq. meters house, the school & college life where he always topped the charts, the gold medal and sound job, the promotion and recognition, the life with wife and then children, the time spent with his 10 years old son and a story that he narrated him recently about a struggling fish.

‘Once there was a scientist who was doing an experiment on fishes, he set up a beautiful aquarium and kept combination of few fishes inside, every day he used to feed them and fishes were happy to be enjoying their life in the set up. One day he decided to create a glass barrier in the tank and separated one of the fish named black Moore from the others. He kept on feeding the other fishes but didn’t give any feed to the black moore, fish could see the feed being given on the other side, so she started to struggle to reach its feed, every time she paces towards the other side, she got hit hard by the glass barrier kept in between. It continued for several days when fish gave up and stopped trying. The scientist now skillfully removed the barrier and fed the fishes on the other side again while continue to monitor the behavior of black moore who preferred to die lying in isolation in a corner rather than trying once again when the barrier was finally removed’

Suhas opened his eyes, he suddenly felt moved by the story and applied the same principle to his life and found himself lying in an isolation on tracks rather than giving one more try and fight once again. The train was near and in a split seconds he decided to jump off the track and save himself.

What does one think when he/she finds himself in an unwanted situation of life, the permanent solution to a temporary problem would always seemed to be attractive and easy.  Every day we come across cases of people losing their lives due to committing suicides. It’s rightly said that no two people are same, the strength and attitude to handle same situation is always different by an individual, the approach and behavior will never be same towards the same complexity. So the problem which might seemed to be an easy task for one might be a tedious task for others.

People say one might have been through a lot that he couldn’t find a way out, yes it can happen with anyone, sometimes it does feel like all doors are locked and there is not even a single key hole to peep through. The situations can lead any one fall into the deepest pit where one can never find a way to come back. However one’s outlook towards life may be, but committing suicide still doesn’t justify the decision to solve the problem. Because the crux of the problem is the devil that doesn’t exist anywhere else than our minds.

Then how one reach the conclusion to end one’s life? When we try to compare our lives with others knowing very well that each life bears fruits of its own destiny? When we lose the battle in our minds? When we tend to forget the fact that after getting out, one has to start his innings again from zero! When we let our circumstances dominate our views? When we tend to lose the brighter side of thoughts? When we allow one’s negative beliefs to spread like a virus in our mind? When we start to feel pity on ourselves?

There can be enormous reasons to feel sad and conclude of ending one’s life. But there is only one thing that would disassociate one from getting disheartened and that’s Perseverance.

Suhas fought every single thought that tried to kill him and saved himself, but not everyone gets a chance to jump of the tracks at the right moment. It has to be a consistent fight with the demons inside our minds. One should remember that nothing worthwhile in life comes without a struggle. There is a saying ‘A smooth sea will never make a skillful mariner’. Everything is difficult before it’s becomes easy, so it’s up to us to absorb it or get absorbed by the situation.